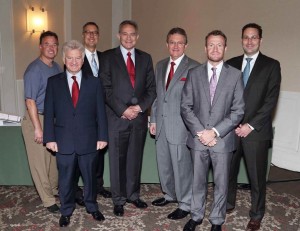 Last week, three lawyers from the Sinas Dramis Law Firm spoke to a group of nearly 200 attorneys about some of the most important current issues in Michigan auto law. On September 29 and 30, the Michigan Association for Justice held the 11th Annual No-Fault Institute in Southfield, Michigan. The Institute was attended by personal injury attorneys from all over Michigan, including Lansing, Grand Rapids, and Detroit. The faculty consisted of some of the most distinguished lawyers in the state, and our firm was honored to have three of its lawyers included in the faculty.

Finally, the second day of the Institute feature two presentations by senior partner George Sinas, who practices in our Lansing and Grand Rapids offices. George is one of the Michigan’s foremost experts on Michigan’s auto no-fault law and co-moderated the Institute. First, George spoke about the legislation pending in Lansing to “reform” Michigan’s no-fault law. As we have explained on this blog, HB 4612 (H-3) seeks to eliminate many of the rights and benefits that injured people and their medical providers have under our current law.

George Sinas also spoke about the current state of Michigan’s auto law “threshold” injury requirement. As explained throughout this site, people who suffer personal injury in auto accidents in Michigan can pursue a claim against an at-fault driver only if they have a serious enough injury. That is what many personal injury lawyers call a “threshold” injury. At the Institute, George reviewed all of the recent case regarding the threshold requirement. In addition to an outstanding presentation, George presented a paper that he co-authored with Sinas Dramis lawyer Joel Finnell. That paper was an extensive review of every single threshold case issued in the last four years by Michigan appellate courts. George and Joel’s paper demonstrated the kind of extensive legal knowledge that Michigan citizens who suffer personal injury in auto accident need to protect their rights.