Selected annually, the Michigan Association for Justice’s “Champion of Justice” is chosen for their efforts to preserve and protect the civil justice system. 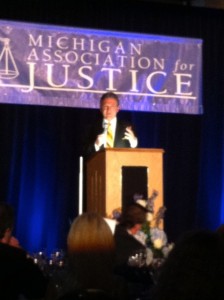 On Saturday, May 10, 2014, George T. Sinas, senior partner at the Sinas Dramis Law Firm, was named the 2014 Champion of Justice, an honor bestowed upon him by the Michigan Association for Justice. George received this award in recognition of his decades of hard work, dedication, and tireless efforts to protecting the rights of Michigan citizens, especially the catastrophically and severely injured. He has devoted much of his practice to the protection, preservation, and improvement of the Michigan Auto No-Fault system, and is considered one of the preeminent experts in this highly-complicated area of law. George has been a key figure in the Michigan Association of Justice, serving as its past president less than a decade after beginning his law practice, and continuing to be an active member of the organization ever since.

In humbly accepting this award, George centered his remarks on the importance of the civil justice system, the “slingshot of democracy” that “is the only real guarantee that, in the secular affairs of man, David can truly slay Goliath.” Simply put, the civil justice system exists so that those who wrong us – be they ordinary individuals or larger corporate entities – may be held accountable for their actions. In that regard, the fight for the preservation of our civil justice system is encompassed in many aspects of our lives, including protecting the rights of the sick and injured among us who require access to resources necessary for aiding their recovery. This is what an organization such as the Michigan Association for Justice and its members, like George, have dedicated their careers to protecting.

His involvement in the fight for Michigan’s auto no-fault system is but one manner in which George has sought to preserve the civil justice system. As George remarked, “[C]atastrophically injured victims have had to fight tooth and nail with insurance companies who have been emboldened by a string of appellate court victories and, as a result, have deliberately made the Michigan no-fault system far more adversarial than it ever was intended to be.” In light of this increasingly adversarial climate, the Coalition to Protect Auto No-Fault (CPAN) was formed in 2003, where George serves as General Counsel. The organizations that currently make up CPAN were once adversaries in the no-fault debate. However, after finding common ground – the protection of the rights of Michigan residents to access the care they need under the no-fault system and providing the tools and resources needed to fight against efforts to limit or remove these rights – CPAN has been a strong, steady force in the discussion.

Of the changes that the insurance industry wishes to make to the system that would only harm the people of this state, George said the following: “[T]he changes the insurance industry seeks are not benign. They include dramatic reductions in medical care coverage, shielding insurance companies from penalties when they do not play by the rules, and stripping people of the right to a jury trial when they are faced to sue their insurance company.” The “reform” being touted by the insurance industry cuts right to the heart of the civil justice system that George fervently defends: protecting the right of individuals who are wronged to hold those who are at fault accountable for their actions. In emphasizing the risk currently being faced by the no-fault system as it currently stands, George warned: “[O]ur no-fault system remains dangerously close to returning to the dark days of Kriener v Fischer, when drunk and careless drivers could severely injure innocent victims on Michigan roadways without any civil accountability.” This is precisely the reason why organizations like MAJ and CPAN, comprised of members like George and the other attorneys who fight every day to ensure that everyone, especially the most vulnerable in our communities, has the right to pursue the justice they deserve.

George’s commitment to protecting those need someone to advocate on their behalf, coupled with a knowledge of Michigan no-fault and personal injury law that can be matched by few, is something that he shares with everyone whose lives he touches. We are incredibly proud that our colleague, mentor, and friend was named the 2014 Champion of Justice. Congratulations, George!