In November 2011, a 19-year-old pedestrian’s life was changed forever when she was hit by a pickup truck while crossing 15 Mile Road in Clinton Township. The violent impact caused her to sustain life-threatening injuries, including traumatic brain injury and spine fractures, among others. 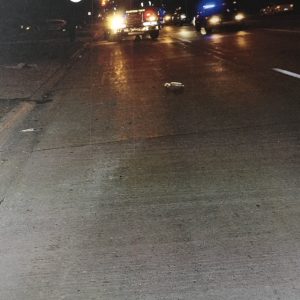 To make matters worse, the pickup-truck driver did not slow down or stop. He fled the scene.

One eyewitness saw everything as it unfolded. This eyewitness was driving behind the truck driver and, when she realized he was not stopping, she made the snap decision to follow him. Her quick-thinking allowed her to get the truck driver’s license plate number. She gave that number to authorities, who were able to identify and locate the truck driver. He pleaded guilty to reckless driving and a moving violation causing serious injuries.

But the criminal prosecution didn’t help the injured pedestrian with her recovery and mounting medical expenses. And the truck driver’s no-fault auto insurance company refused to resolve the case for the policy limits.

That’s when attorney Stephen Sinas filed suit against the truck driver in Macomb County Circuit Court, seeking economic (loss of income) and non-economic damages (Case No. 14-4176-NI). He also filed a claim against the truck driver’s business, which owned the truck, alleging negligent entrustment. As it turns out, the truck driver had a terrible driving record, including several traffic offenses and speeding violations, as well as a DWI charge that had resulted in a suspended license. 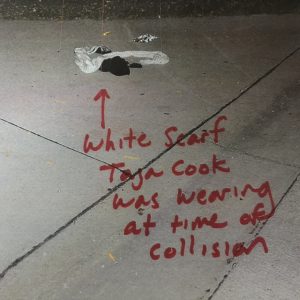 The pedestrian’s scarf, lying on the ground after the accident

At deposition, the truck driver testified he was traveling 30 mph, which was 10 mph below the posted 40 mph limit. He also said that he applied his brakes at the time of impact. His reason for not stopping after he struck the pedestrian? He thought she was a “garbage can.”

The one eyewitness saw things differently. She testified that her own vehicle’s speed was about 50 mph. She said that she was not gaining ground on the truck, but was just keeping up with it, thereby indicating the truck was traveling in excess of 30 mph. She also testified the truck driver did not apply his brakes when he hit the pedestrian.

There was, however, one obstacle for Sinas to overcome: the fact that his client was jaywalking when she was hit. Sinas claimed that while a jury could infer his client may have been somewhat negligent, this did not negate the truck driver’s egregious and reckless conduct. Sinas also emphasized the truck driver’s terrible driving record.

The case was facilitated and, based on the deposition testimony, various reports, and affidavits from several experts, the matter settled for $1 million.

According to Sinas, the case shows just how crucial a single witness can be. “This case never would have been filed if not for the one person traveling behind the truck driver. It shows the good that comes about when someone ‘does the right thing.’”

The personal injury settlement is also a testament to how Michigan’s no-fault auto insurance system benefits those injured in auto accidents. “The no-fault system is here to help people recover, and this case makes that clear.”