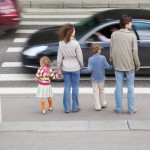 This past New Year’s Eve, a young pedestrian in San Francisco, crossing the road with her mother and brother, was struck and killed by a cab driver on his way to pick up customers. It is alleged that the pedestrians were crossing the street legally when the impact occurred. This case is remarkable not only because it resulted in the tragic, abrupt end of a young girl’s life, but also because of the legal issues it raises.  The cab driver involved in the accident may or may not have been using an application on his cell phone called Uber at the time.

In theory, the way in which Uber works is quite simple.  A person who needs a cab ride logs into the Uber app on his or her phone.  The cab driver is also logged into the app.  A map on the app allows both the customer and driver to see each other’s location. When the customer is picked up by the cab driver, no money is exchanged – not even for a tip.  Instead, the passenger pays through a credit card previously registered with his or her Uber account. Uber then takes a percentage of the fee paid, with the balance going to the driver.

A wrongful death lawsuit has been filed on behalf of the girl against Uber. The suit alleges that because the driver was an employee and/or agent of Uber, the company should, as a result, be held liable for the girl’s death (stated another way, the company should be held “vicariously liable”). By contrast, Uber claims that even though the driver is associated with its company, he was an independent contractor and was not on the clock at the time the incident occurred, and thus it (Uber) should not be held responsible.

Whether this type of business relationship means that Uber can be held liable for the injuries caused by drivers using its service is not clear in California, let alone Michigan. Currently, Detroit is the only city in Michigan where Uber is available. As unfortunate as this event was, we will undoubtedly continue to see continued technological advances and upgrades to our modes of transportation, whether it be through the expansion of the services provided by companies such as Uber, or even though the testing or eventual use of driver-less cars on Michigan roads. However, these developments, as simple as some may be in theory, will probably give rise to legal questions that may be more difficult to resolve.