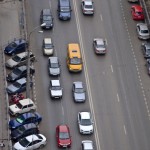 Last month, the Michigan Supreme Court heard oral argument in Yono v Department of Transportation concerning this very issue. Plaintiff had suffered injury while walking back to her car, which was parallel parked along M-22 in Suttons Bay, Michigan.  Plaintiff filed suit against the Michigan Department of Transportation (MDOT), alleging that it had a duty to maintain the area where she sustained her injury.

In response, MDOT argued that because the area where Plaintiff parked was not an “improved portion of the highway designed for vehicular travel,” it did not have a duty to keep it in reasonable repair, and was thus entitled to governmental immunity. While acknowledging that it did have a duty to maintain M-22, MDOT claimed that it did not have to maintain the parallel parking area, as it was not a travel lane.

The trial court found that area in question was intended for vehicular travel, and thus MDOT could not escape liability by asserting governmental immunity. It noted that “it was clear that cars ‘have to travel [in the area in question] to park,’” and that “the parallel parking lane was not a shoulder and not intended for emergencies alone.”

The Michigan Court of Appeals affirmed the trial court’s ruling, holding that MDOT could not escape its duty to maintain the area by claiming governmental immunity. In so concluding, the Court of Appeals noted that there was nothing physically separating the parallel parking spaces from the rest of M-22, and that the manner in which the highway was designed was such that vehicles could merge from the center lane to the parking spaces, and vice versa. In this regard, the Court stated the following:

During oral arguments heard by the Michigan Supreme Court, MDOT once again emphasized that the area where the Plaintiff sustained her injury was not intended for vehicular travel, and that it was important to assess how the road is used to determine whether it intended for vehicular travel. We will have to see what the Supreme Court ultimately decides.