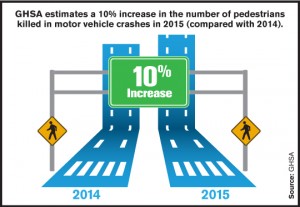 Remember when your mother told you to be careful crossing the street? This advice rings true now more than ever, in light of a new federal report that says pedestrian deaths are increasing nationwide at a startling rate.

According to the Governors Highway Safety Administration (GHSA), nearly 2,400 pedestrians were killed in the United States during the first half of 2015. This is a 10 percent increase over the same time period in 2014. When all the numbers are compiled, the GHSA says 2015 will see the largest year-to-year surge in pedestrian fatalities since national record-keeping began in 1975.

Twenty six states and the District of Columbia had a greater number of pedestrian deaths during the first six months of 2015. Meanwhile, 21 states reported decreases in pedestrian fatalities throughout early 2015, including Michigan, which had 9 percent fewer pedestrian deaths.

Another unnerving statistic is that pedestrians now account for 15 percent of all vehicle crash-related deaths. Ten years ago, this figure was 11 percent.

The report suggests the increase in pedestrian fatalities can be attributed to several factors, including:

What factors contribute to pedestrian fatalities? The top ones are: 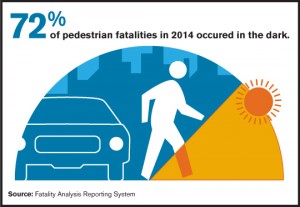 In the meantime, states are implementing various strategies to help reduce pedestrian deaths. Currently, Michigan is addressing pedestrian safety in several ways, including a statewide analysis of pedestrian and bicyclist crashes. The analysis, conducted by Western Michigan University, is looking at crash causation, best practices, and countermeasures to help decrease fatalities and injuries.