An auto insurance company properly denied a claim for uninsured motorist benefits because the claimant’s vehicle and the other vehicle did not come in “direct” contact with each other, the Michigan Court of Appeals has ruled. 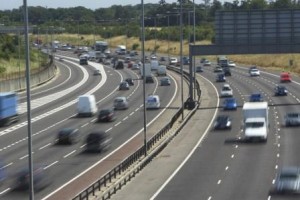 suffered injuries after slamming on her brakes while driving on I-96. She suddenly braked because a piece of sheet metal flew off a semi-truck traveling in front of her car. The sheet metal landed on her car’s windshield, shattering it. Because the semi-truck was never identified, she filed a claim for uninsured motorist (UM) benefits with Auto Club Group, her auto insurance company. Auto Club Group denied her benefits, asserting it didn’t have to pay because the auto insurance policy said that, in a hit-and-run incident, the vehicles had to make “direct physical contact” with each other — and in this case they did not.

The Court of Appeals agreed with Auto Club, finding the claimant was not entitled to UM insurance benefits. To make its decision, the Court relied on the language in the auto insurance policy, which said:

“a hit-and-run motor vehicle of which the operator and owner are unknown and which makes direct physical contact with: (1) you or a resident relative, or (2) a motor vehicle which an insured person is occupying.”

The Court of Appeals pointed out that prior appellate decisions have held that both direct and indirect contact between vehicles can trigger UM benefits, including contact with a propelled object (like sheet metal) in certain circumstances.

In particular, the Court of Appeals noted the claimant’s auto insurance policy did not refer to propelled objects, like the policy language at issue in previous cases. The Court said:

Because the claimant’s vehicle and the semi-truck did not make direct physical contact, insurance coverage was not triggered, the Court of Appeals concluded.