In an effort to address the problem of excessively high auto insurance rates in Detroit, SB 288 was recently introduced by Senator Virgil Smith. The Senate Insurance 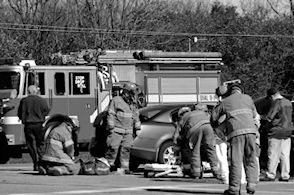 Committee recently amended this bill, which is currently referenced as SB 288 (S-3). This bill gives Detroit residents, as well as residents of any city where more than 35% of its residents are uninsured, the option to purchase a stripped-down auto no-fault insurance policy that is not legal to sell to any other Michigan citizens. This type of substandard no-fault policy is referred to as a “Qualified No-Fault Policy.”

These substandard no-fault policies contain drastic limitations in coverage and benefits compared to that which is available under a traditional Michigan no-fault insurance policy. That means people insured under these substandard policies will have second-class auto insurance compared to other Michigan citizens. Moreover, such policies are likely to have significant negative consequences statewide. The main features of SB 288 (S-3) are as follows:

Unlike the current no-fault system that guarantees lifetime medical coverage for an injured person’s care recovery or rehabilitation, these substandard no-fault policies provide coverage that is wholly inadequate to properly care and treat people seriously injured in auto accidents. Some of these coverage limitations are explained below:

(a) The $25,000 cap applies to all forms of no-fault PIP benefits in cases not involving “critical care.”

Section 3107(3)(a) of the bill provides that coverage is capped at $25,000 for any medical services that do not involve “critical care.” This cap also applies to the replacement service and work loss benefit component of PIP benefits. Therefore, people who are disabled from work as a result of their auto accident injury only have a total of $25,000 of coverage for all losses.

(b) The $25,000 cap might be judicially interpreted to be an aggregated cap that applies to all resident family members injured in the same accident.

Section 3107(3)(a) of the bill states that these substandard policies “may limit the total amount of benefits payable . . .[to] an amount that is not less than $25,000.” Therefore, if several family members living in the same household are injured in the same accident, the argument will be made that all no-fault benefit claims made by all injured family members for non-critical care medical services, replacement services, and work loss benefits are subject to an aggregate cap of $25,000.

(c) The $250,000 critical care coverage is subject to significant limitations that make it unavailable in many serious injury cases.

Section 3107(3)(b) of the bill provides that the $250,000 medical coverage only applies to expenses incurred for an injured person’s “critical care,” which is defined as “care rendered at acute care hospital or trauma center immediately following the motor vehicle accident, necessary to save the individual’s life or treat life-threatening or permanently disabling injuries until the individual is stabilized.” The bill further provides that a person is deemed stabilized when the individual can “safely be discharged or transferred to another acute care hospital or trauma center, rehabilitation or other facility, regardless of whether the patient is, in fact, discharged or transferred at that time.” Once the person’s life is determined to “stabilized,” the $250,000 coverage is no longer available for any additional medical and rehabilitative treatment the injured person may need. Moreover, insurance companies have the power to dispute whether treatment meets the definition of “critical care.” Specifically, under Section 3107(4), the bill states that an insurance company may “contest the charges of an acute-care facility under this section to the extent the Insurer can present competent evidence showing that the facility’s charges relate to post-stabilization services.”

(d) The $250,000 might be judicially interpreted to be an aggregated cap that applies to all resident family members insured under the same policy.

Section 3107(3)(b) of the bill states that under these substandard policies, there is “$250,000 in the aggregate, payable only for critical care for an individual named in the qualifying no-fault policy, the individual’s spouse, or a relative of either domiciled in the same household, who is injured in a single motor vehicle accident during the policy term.” Therefore, in situations where multiple family members living in the same household require critical care for injuries sustained in the same motor vehicle accident, the argument will be made that the critical care coverage for these people is limited to an aggregate cap of $250,000.

Under Section 3107(3) of the bill, the children of parents who purchase a substandard policy will be subject to the coverage limitations contained within that policy. This will result in those children being deprived of the same rights and coverage available to other children in Michigan whose parents are insured under a traditional no-fault policy. For example, if a 7-year-old Detroit child, whose parents purchased a substandard policy, sustains catastrophic injuries when hit by a car, the child will be subjected to the drastic coverage limitations contained within the parents’ substandard no-fault policy. On the other hand, if a 7-year-old child from Royal Oak is catastrophically injured in the same way, that child will be able to claim no-fault benefits for reasonably necessary medical care for the rest of his or her life.

Unlike other catastrophically injured auto accident victims who are entitled to receive reasonably necessary medical care for life, this bill specifically prohibits a person insured under a substandard policy or his or her resident relatives from recovering no-fault benefits through the Michigan Catastrophic Claims Association.

Under Section 3157(3) of the bill, an insurance company may require a person insured under a substandard policy to obtain pre-authorization for products, treatment, services, accommodations, or rehabilitative or occupational therapy. The section further states that pre-authorization shall be granted only if “medical necessity has been demonstrated.” This is contrary to the “reasonable necessity” standard of traditional no-fault policies. Moreover, if a person fails to obtain written pre- authorization for a claim for a particular product, treatments, services or accommodations, the person’s claim shall be void.

Under the bill, if a drunk or other negligent driver causes a person to sustain serious injury and the victim is insured under a substandard policy, the drunk driver may be immunized from any financial liability for the victim’s medical expenses that are not covered under the substandard no-fault policy. This result could happen because the bill does not clarify that such liability would be retained under the existing language of §3135(3)(c) of the Act.

The drastic limitations in coverage available under these substandard policies will apply to all Michigan hospitals and medical providers. Therefore, if any person insured under a substandard policy is injured in an auto accident anywhere in the state, the local hospital or medical providers that treat that person will be subject to the coverage limitations and rules that apply under the victim’s substandard policy. As a result, any unpaid costs for medical care provided to such persons will be absorbed by the providers who rendered the care and to the community they serve.

Section 3157(2) states that “[t]here is no private right of action for claims arising under or relating to this subsection.” Therefore, the bill clearly prohibits a medical provider from bringing a direct cause of action against an insurance company to enforce payment the provider’s services. Moreover, it could be argued that the language of the bill also prohibits the patient from bringing his or her private action against the insurance company to enforce payment of the person’s medical expenses.

Section 3101(2)(c) of the bill provides that substandard policies can be sold to residents of any city where more than 35% of people who regularly drive motor vehicles are uninsured. Therefore, this law may very well lead to substandard no-fault policies being sold throughout Michigan.

In light of the fact that the current Michigan no-fault law guarantees reasonably necessary lifetime medical care for auto accident victims, a robust medical economy has been created in this state to provide such patients with the care they require. The widespread sale of substandard no-fault policies would likely undermine that system in a variety of ways, some of which are discussed below:

(a) Many patients purchasing substandard policies will go without necessary medical care.

There will be many situations where people insured under substandard policies will go without necessary medical and rehabilitative treatment for serious injuries sustained in auto accidents because they have exhausted the limited coverages available under these policies and have no other applicable coverages that will pay for such care and treatment.

(b) Many patients purchasing substandard policies will face financial ruin.

Many substandard policy holders who suffer serious injury will have substantial unpaid medical expenses that will become the personal financial responsibility of the patient. This will cause great economic hardship for many families and may even force some of them into bankruptcy.

(c) Hospitals and medical providers will likely suffer a major loss in revenue in communities where the substandard policies are sold.

In areas where substandard policies are sold, there will be a major loss of revenue for hospitals and medical providers who render treatment to patients insured under these policies. This loss in revenue will further burden local and state governments.

(d) Communities where substandard no-fault policies are sold are likely to experience a significant loss of jobs because of the coverage limitations contained in these policies.

(e) The sale of substandard no-fault policies will likely increase the tax burden on Michigan citizens.

The limited coverages available under substandard no-fault policies will inevitably force many auto accident victims covered under these policies to go into Michigan’s Medicaid system. This will create a major cost-shift from private auto insurance to government-based health insurance. Michigan taxpayers will ultimately bear the burden of that cost shift.

SB 288 essentially creates an insurance system that gives economically disadvantaged people “second class” status by leaving them with no choice but to go without insurance all together or buy substandard policies that provide no-fault benefits that are dramatically less than traditional no-fault benefits available to the general population. Moreover, such a solution to the insurance affordability problem may have severe constitutional flaws.