An uninsured motorcyclist who was not wearing a helmet at the time of his fatal accident was not precluded from recovering no-fault insurance benefits, according to the Michigan Court of Appeals.

In Estate of Swick v Farm Bureau Ins Co (unpublished opinion, 4/26/2016), Jack Swick was killed when the motorcycle he was driving collided with a vehicle insured by Farm Bureau Insurance 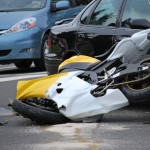 Company. Swick was not wearing a helmet and the motorcycle was uninsured. It was disputed whether Swick “owned” the motorcycle within the meaning of the No-Fault Act because he never signed the certificate of title as the purchaser. The certificate of title also did not include the sale date and price, and the odometer reading. Farm Bureau denied no-fault coverage and Swick’s estate brought an action for PIP benefits. The trial court ruled in favor of the estate, and Farm Bureau appealed.

The Court of Appeals held the statutory requirements for an effective transfer of title had occurred, and therefore MCL 500.3113(b) did not preclude Swick’s estate from collecting PIP benefits. Under MCL 500.3113(b), uninsured owners or registrants of motorcycles are not entitled to PIP benefits.

But Farm Bureau argued that, even if PIP benefits were available under §3113(b), they were nevertheless precluded by MCL 257.658 because Swick was not wearing a helmet at the time of the accident. MCL 257.658 is part of the Michigan Vehicle Code, and sets forth the circumstances in which a person operating or riding a motorcycle is not required to wear a helmet.

However, the Court of Appeals further said:

“nothing in the plain language of these statutes actually precludes an uninsured, helmetless operator or rider from collecting PIP benefits.”

Farm Bureau argued the No-Fault Act and the Michigan Vehicle Code should be read together, and that the Legislature intended to preclude no-fault benefits, even if it did not expressly say so in the statutes. The Court of Appeals rejected this argument and concluded:

“Regardless of the Legislature’s intent to require helmetless operators and riders to purchase security for PIP benefits under MCL 257.658(5)(c), it did not preclude them from collecting PIP benefits if they nevertheless failed to satisfy this requirement. Thus, any evidence that Swick was not wearing a helmet did not create a question of fact regarding his entitlement to PIP benefits, and the trial court properly rejected this defense below.”